For the 2 nights I spent in Oviedo I chose to stay in the Hotel Vetusta rather than the Pilgrim albergue which allowed me to stay out late and enjoy the atmosphere of The Fiesta de San Mateo as well as taking in the Real Oviedo game ( the albergues have a 10pm curfew ) . The Fiesta takes place in Oviedo every September for 2 weeks and the 21st ( the feast of San Mateo ) is a holiday in the city. It was lively to say the least with plenty of dancing in the streets . I particularly enjoyed Spanish Country rocker Paula Rojo and her band . I’ve developed a bit of a yen for modern country music in recent years , a cause of much mickey taking from some quarters. I blame Whispering Bob .

I rose early on Friday having slept fitfully , partially due to excitement due to starting the walk but I was also disturbed by the street cleaners. Anyone who visits a Spanish city will know that the street cleaners work in the early hours and can make a lot of noise. Judging by the duration of the noise in Oviedo I would guess some of them must have OCD.

Around 8.30am I set off for the cathedral , the official start point of the walk. It didn’t take long to spot the scallop shells embedded into the city pavements indicating the route. 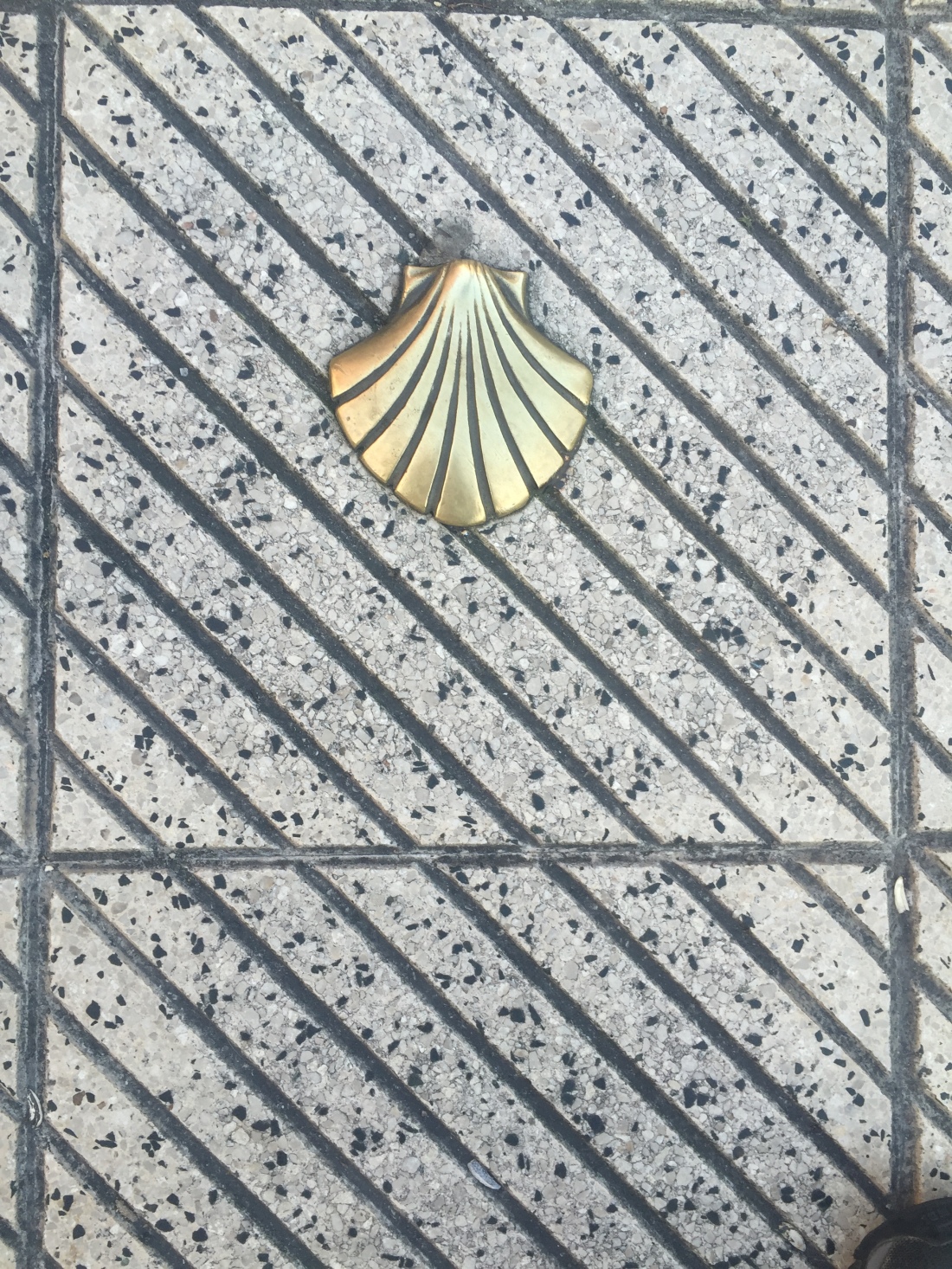 I walked a few kilometres through the suburbs of Oviedo where the pavement scallop shells gave way to the familiar yellow arrows . The arrows pointed me along a gradual ascent into the hills around the city and  through a forested section where I met the first of my fellow peregrinos , a group of 3 ladies from Bogota in Columbia. Only one of them , named Marlene , could speak English as she spent the first 23 years of her life in New York. She said it was a dream for her and her friends to walk the Camino so they were very excited on their first day. One of her non – English speaking friends is a paediatrician so I was sorry the communication barrier stopped us having a chat about health care in our respective countries.

We walked on through a beautiful pastoral landscape and I noticed the Asturian version of the Galician Horreo ( grain store ) present next door to a lot of the farmhouses. These are called Panera and are different to the Horreos in that they have 6 or 8 ” legs ” .

At one point on the walk I noticed an elderly couple in a field and the husband was cutting the grass with a scythe whilst his wife forked the cut grass into a wheelbarrow. It reminded me of my late Grannie Kate Murtagh who was the last person I’d seen using a scythe to cut the grass on her farm in County Sligo in Ireland.

After quite a tough walk of about 25km ,with lots of ascending and descending , we arrived at the albergue in Grado late afternoon to be greeted by the two Hospitaleros ( volunteers ) who both came from Canada . There were only 3 beds available and the Columbian ladies looked in more need than me so I offered to walk on to the albergue in the next village but the Hospitaleros kindly offered to give me the spare bed in there own room which doubled up a their sleeping quarters and their office.

I grabbed a bite to eat in town and wandered back to the albergue to find the Columbian lasses leading a Tai Chi session. I should have learned my lesson on my last Camino. Past experience has told me that I am constitutionally unfit to carry out the physical contortions associated with this Eastern stuff , notwithstanding the fact that I look like a big daft eejit when I’m doing it .

I awoke the next morning to find one of the Hospitaleros padding about barefoot in the kitchen in his pyjamas . He had a look of a very pissed off Victor Meldrew about him and he told me I’d been snoring all night. He didn’t let on but I suspect after a while he’d put a mat on the floor and slept in the kitchen. He said it was ” the last time we let a bastard pilgrim sleep in our room “. I think he was joking …..